JAR provides grants and strategic support to nonprofit partner organizations throughout all five boroughs focused on the following program areas: youth and education, justice and safety, housing and community, and pandemic relief.

Even for jaded New Yorkers, it was a shocking murder. For the television industry, the shooting thirty years ago today of 33-year-old advertising sales executive John Reisenbach was a gut punch and wake-up call.

Around 11:40 p.m. on July 30, 1990, during a peak of the crime wave that plagued in the New York City in the 1980s and early ’90s, Reisenbach was gunned down in an apparent robbery while he was using a pay phone in a booth around the corner from his apartment in the West Village. He was struck three times, twice in the chest and once in the leg, by .38-caliber bullets.

Reisenbach’s co-worker and intended business partner, Larry Schatz, was on the other end of the phone at the time and heard what sounded like a scuffle and the receiver hitting the side of the phone booth. Schatz called 911 to report that his friend was being mugged. Reisenbach was pronounced dead a half-hour later at St. Vincent’s Hospital.

“It took everybody aback for a long time,” says Ira Bernstein, co-president of Lionsgate’s Debmar-Mercury, who worked with Reisenbach early in his career. “It’s not the kind of thing you can easily forget.”

Rather than dwell on the tragedy of his death, Reisenbach’s family and friends have worked since 1991 to honor his memory through a foundation that has a simple mission: to make New York City a better and safe place to live and work. The John A. Reisenbach Foundation has defied the odds against small nonprofits to thrive into its fourth decade as a distributor of grants to grassroots organizations that have direct impact on the lives of residents across the city. The foundation was rooted in the determination of Reisenbach’s father, longtime Warner Bros. marketing chief Sandy Reisenbach, to leave a proud legacy for his oldest child and only son.

Read the entire article here. Please donate and help us as we work to support a better and safer NYC. 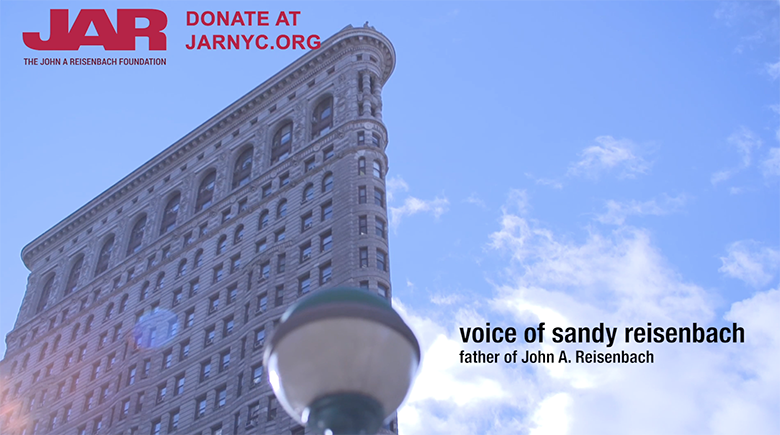 FINANCIAL AND OTHER INFORMATION ABOUT THE JOHN A. REISENBACH FOUNDATION’S PURPOSE, PROGRAMS AND ACTIVITIES CAN BE OBTAINED BY CONTACTING THE EXECUTIVE DIRECTOR AT 116 W. 23rd St, New York, NY 10011 AND 646.975.7482 OR FOR RESIDENTS OF THE FOLLOWING STATES, AS STATED BELOW. Florida: CH No. 61397 A COPY OF THE OFFICIAL REGISTRATION AND FINANCIAL INFORMATION MAY BE OBTAINED FROM THE DIVISION OF CONSUMER SERVICES BY CALLING TOLL-FREE, WITHIN THE STATE, 1-800-HELPFLA OR AT WWW.FLORIDACONSUMERHELP.COM. NEW JERSEY:INFORMATION FILED WITH THE ATTORNEY GENERAL CONCERNING THIS CHARITABLE SOLICITATION AND THE PERCENTAGE OF CONTRIBUTIONS RECEIVED BY THE CHARITY DURING THE LAST REPORTING PERIOD THAT WERE DEDICATED TO THE CHARITABLE PURPOSE MAY BE OBTAINED FROM THE ATTORNEY GENERAL OF THE STATE OF NEW JERSEY BY CALLING (973) 504-6215 AND IS AVAILABLE ON THE INTERNET AT HTTP://WWW.STATE.NJ.US/LPS/CA/CHARFRM.HTM. NEW YORK: UPON REQUEST FROM THE ATTORNEY GENERAL CHARITIES BUREAU, 120 BROADWAY, NEW YORK, NY 10271. CONTRIBUTIONS ARE DEDUCTIBLE FOR FEDERAL INCOME TAX PURPOSES IN ACCORDANCE WITH APPLICABLE LAW. REGISTRATION IN A STATE DOES NOT IMPLY ENDORSEMENT, APPROVAL, OR RECOMMENDATION OF THE JOHN A. REISENBACH FOUNDATION BY THE STATE.