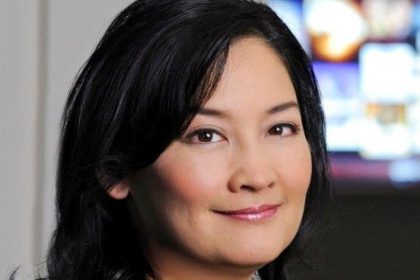 Today, we are proud to feature Geri Wang, President of Sales  at ABC Television Network as the last of our honoree highlights!  Geri has a long public service history and an impressive career, and we are honored to present her with a 2015 Reisenbach Distinguished Citizenship Award.

Geri began her career at ABC in 1990 and quickly advanced through many positions of increasing responsibility. Her wide-ranging expertise and demonstrated track record of success led to her appointment as Senior Vice President of Primetime Sales in 2000. A decade later, she was promoted to president of ABC Sales. Her role emcompasses ABC Primetime, ABC Daytime, ABC News, ABC Late-Night, ABC Digital, Disney/ABC Domestic Television Syndication Group, Fusion, and ABC Sales Development.

As president of ABC Sales, Geri leads teams of nearly 300 people responsible for advertising sales and integrated marketing across the entire ABC portfolio. She has been instrumental in creating groundbreaking approaches to new media and digital within the realm of television advertising. She oversees a business group generating multi-billion-dollar revenues annually, with offices in New York, Chicago, Detroit, and Los Angeles. Advertising Age magazine has recognized Geri’s talents and incredible feats within the advertising and media industries and honored her as one of the “Women to Watch”. She has been named to the “Mediaweek 50” list of top media executives in the U.S.

Although Geri has an increasingly busy schedule, Geri rededicates herself to her community and performing public service. She is a Board member of the American Advertising Federation, serving as Assistant Treasurer of the group’s National Board of Directors. She also mentors young people through both the National Association of Multi-Ethnicity in Communication and the ABC Media Networks programs.

Congratulations, Geri, and thank you for all you do for New York City!  We’re so proud to honor you as a Reisenbach Distinguished Citizen.