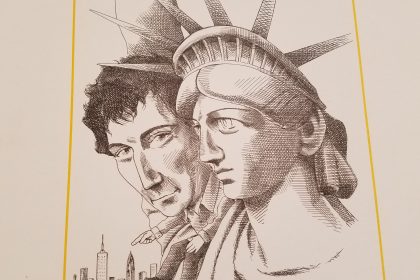 This year is our foundation’s 25th, a natural time of reflection. As we look ahead to the next quarter century of service to New York City, we also look back and remember the life of John Reisenbach, whom our organization was formed to honor. A rising star in the advertising world, John was the victim of a random, never-solved shooting in the West Village in 1990. Though devastated, his friends and family resolved to move forward in a spirit of love and positivity, and they created our foundation in John’s name. The founding board resolved to honor John by giving New Yorkers across all five boroughs the opportunity to live, work, and pursue their dreams without fear of violence or deprivation. Thus, our mission of promoting safety and quality of life was born.
This week, one of our founding board members, Mike Weiden, shared a copy of the program from our foundation’s 1994 gala. The cover illustration by David E. Smith depicts John sitting on the shoulders of the Statue of Liberty and pointing to the New York City skyline. Over two decades later, we are sure that John still watches over New York City, and that his legacy will continue to inspire us as we work “For a Better and Safer New York City.”