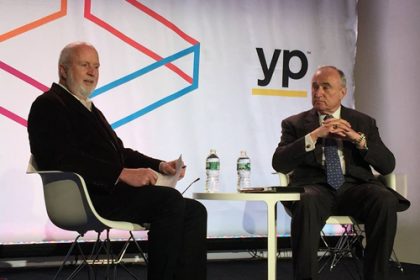 A near capacity crowd was on hand the morning of May 20th, for “Technology, Crime and Policing in the Digital Age”, one of the highlights of Internet Week in New York.

Ad Age Publisher (and Reisenbach board member) Alison Arden introduced JAR Chairman Gerry Byrne and New York Police Commissioner William Bratton, for a Q&A covering the many ways the NYPD has adapted to and benefitted from the newest digital technology.

Gerry noted that the Reisenbach Foundation’s brief history actually predates the dawn of the digital age, pointing out that if John Reisenbach had owned a cell phone instead of having to use a public phone on the street, the tragedy of his untimely death would have been avoided. This led to an overview by Commissioner Bratton about the ways the NYPD has changed and improved thanks to digital policing policies. Among the highlights of his comments:

• 2015 is the NYPD’s ‘Year of Technology’. The department is spending more than $400 million this year to make New York the safest and most digitally connected city in the world.

• The department now has a 250 member Computer and Digital Larceny Unit to combat ID theft, using the latest data mining tools to track and apprehend offenders.

• The department’s social media exposure across all platforms is second to none, and allows the public to have instant access to – and make instant comments on – police activities, from the commissioner’s office down to the precinct level.

• Officers on the street soon will be equipped with smart phones loaded with police-only apps that give instant ID, fingerprint, and record checks of suspects as they are apprehended. GPS equipped tablets and an expanded fiber optic network will make each officer on the beat a virtual research and analysis expert, able to follow leads and crimes in progress and process arrests quickly.

• The department has an aggressive program to counter cyber bullying and stalking. There’s a corps of analysts dedicated to the project, and they use data mining and classified retrieval techniques to follow and build evidence against perpetrators. However, Commissioner Bratton stressed that education is the key to eliminating the scourge of cyber bullying. Students, teachers, administrators, and most of all, parents, must be involved in the program. As in any other conflict resolution, the police should be the resource of last resort.

• In the ongoing battle against terrorism, the NYPD maintains the world’s only ‘foreign force’, a unit of 12 detectives stationed in the Middle East, in London, Australia, and wherever else needed to gather intelligence in real time, enabling the NYC force to be ready before the fact to prevent attacks on our home soil. Since no public monies are allowed for this work, the funding comes from private sources, including the Police Foundation, a Reisenbach partner program and grantee.

Our thanks to Internet Week New York and to Ad Age and Alison Arden for sponsoring this valuable public service event.