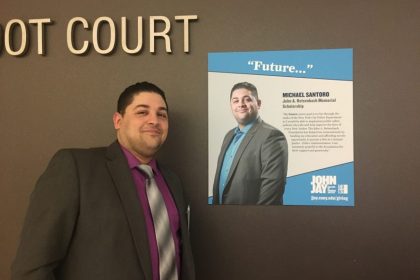 Meet Michael Santoro, a current recipient of the John A. Reisenbach Scholarship at the John Jay College of Criminal Justice. An NYPD Sergeant, Michael is also pursuing a master’s degree in criminal justice. Read his story below:

Describe your current work and career path for the future.

My current career started in July of 2010 when I was hired as a probationary Police Officer. I was then assigned from Dec 2010-May 2012 to operation Impact in the 77th Precinct in Crown Heights Brooklyn. I was transferred to the 67 precinct in East Flatbush and remained there until November of 2014 where I was then transferred to Brooklyn South Borough Crime, and aggressive anti-gun plain clothes unit. In October of 2016 I was promoted to Sergeant and transferred to the Midtown North precinct which covers many famous landmarks including Rockefeller center, St. Patricks Cathedral and John Jay College. My future career plans are to get promoted to the rank of 1 star chief in the NYPD, I will need to pass civil service exams to become promoted to Lieutenant and Captain, and then be promoted twice more from Deputy Inspector to Inspector before achieving the Rank of 1 star Chief. I am also excited to start my career as an educator, once I have graduated with my MA in Criminal Justice from John Jay I plan to start teaching at the college level and educating the future of the Criminal Justice System.

What does being a Reisenbach Scholar mean to you?

To me being a Reisenbach Scholar is one of the best accomplishments I have ever achieved. I am so proud and humbled to have my name associated with this amazing foundation. From the moment I first read the story of John A. Reisenbach I felt an immediate connection to this organization. I was amazed by all the great work that the Reisenbach Foundation does for communities in NYC and after the realization that both the Foundation and myself really just want to make New York City a safer place for all New Yorkers, I knew that I had to apply and become associated with this Foundation. The Reisenbach Foundation has provided me the opportunity to pursue my future career goals by helping fund my Masters Education. In doing so the Foundation has enabled me to achieve my dreams of career advancement throughout the ranks of the NYPD and also as a future educator. I am forever grateful to this wonderful and amazing organization.

How has your John Jay education helped you become better in your position?

My John Jay education has helped me become better in my position as a NYPD Sergeant by first increasing my critical thinking skills. My education has helped me look at the bigger picture when it comes to making New York a safer place, I have learned about such topics as crime mapping and crime prevention strategies which has helped me focus on the issues that affect all of New York City and learned how to implement these strategies into actual plans and make a difference in the communities that I serve.

Why do you think it is important to have safer communities in NYC?

I feel that it is important to have safer communities in NYC because all New Yorkers deserve to live in a city that they can feel comfortable walking to the store and going to work. The most important thing a citizen of this city could feel is safety and comfort no matter where in the city they travel. If the communities in NYC were safer, it would also help boost the economy for the city and increase tourism; not to mention making New York City the most desirable place to live and work. I feel that this is totally achievable and will be the product of hard work and collaboration between the communities, their leaders and the Police Department. The first step in this process is communication, once an honest and open dialogue is achieved between the communities and the police that serve them, then we can truly start to build safer and stronger communities in NYC.