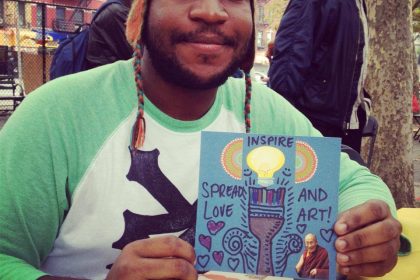 The Point CDC is dedicated to youth development and the cultural and economic revitalization of the Hunts Point section of the South Bronx.  They work to celebrate the life and art of this community, an area traditionally defined solely in terms of its poverty, crime rate, poor schools and substandard housing.  This organization offers a multifaceted approach to asset-based community development. It’s programming falls within three main headings – Youth Development, Arts and Culture and Community Development.  They believe that young people have the ability to transform their neighborhoods.  Two programs that the Point CDC offers its youth are Camp Powerpoint (CPP) and The House of Spoof Collective (THOSC).  Camp

Powerpoint provides participants with pre-­professional training in areas such as literacy and digital media, environmental and social justice, and civic engagement with the goal of providing participants with the knowledge, support and opportunities required to redress social and environmental inequalities in their community. Taking place from July 5 to August 11, 2016, CPP engages at least 65 youth ages 14­ – 21 years old from throughout New York City.  The House of Spoof Collective is an arts collective formed in 2010 by emerging artists of THE POINT in honor of their friend, Glenn “Spoof” Wright, who was senselessly murdered in a mistaken-­identity act of violence.  The mission of THOSC is to bring together artists of all ages from all over the world to celebrate the role of art in the vitality of their communities and to highlight the benefits of art, culture and community as an alternative to violence and as a form of trauma relief. THOSC offers visual art exhibits, free arts workshops and live performances, mainly during the summer months, traditionally the most challenging and violent time of the year in Hunts Point.  THOSC incorporates green practices in the studio and demonstrates understanding of social and environmental issues that affect their community.